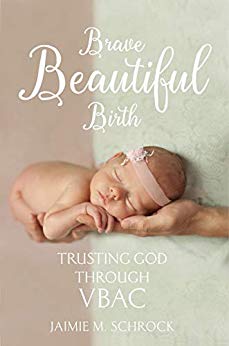 I decided to write a book after the birth of my fourth child because honestly, I didn’t know what to do with myself. I had worked so hard towards my VBA3C. It seemed weird, even with four kids to not have something to work on and prepare, besides normal life. My heart was overwhelmed with God’s goodness and love for me and I knew I wanted to share more of not just my story, but I really believe this is all about Him.
BUY NOW
Follow Us 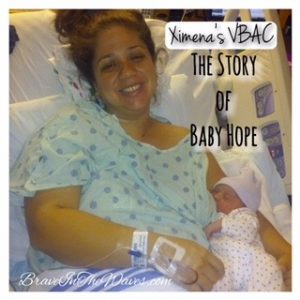 I am so excited to finally share my testimony. I received prenatal care with the same provider throughout my pregnancy. From the beginning I searched for a provider who would assist me with my desire to have a vaginal birth after a cesarean. My doctor provided good prenatal care throughout my pregnancy. We differed opinions towards the end of my pregnancy when I reached my 40 weeks and my baby had not dropped and my cervix was not “favorable”. When we reached this point (my baby didn’t arrive on her estimated due date (12/25), my doctor scheduled a repeat c-section for (12/28). I said I was not moving forward with her recommendation.

She advised me on everything that could go wrong if I were to wait. I was nothing short of scared. I requested a BPP and an NST. The doctor’s office scheduled one for (12/27). That day my doctor was on call. I had my tests done and thank God everything was showing like the baby and pregnancy were going well. Nonetheless, the doctor was called after my tests were done. She gave me the “talk” again. This time she was very graphic about what could go wrong. This was beyond scary.

Yet something inside of me didn’t want to lose hope that this was a possibility for me…to have a natural birth. I had a cesarean section with my first child so I knew what it was; I knew how I felt going into it and coming out of it. I felt devastated that’s how I felt. I felt like I had been cheated on my birthing experience. I knew I didn’t want that this time around…at least not if there was not a real need for one.

She intimidated my husband for agreeing with me about waiting.

She had us both sign a papers stating what she had verbally described to us already. My husband was so scared that after that appointment he said that he was done…that he was not for waiting anymore.

Then I felt doubly bad, I was not listening to my doctor and my heart ached because I wanted to agree with my husband so bad but I just could not fully come to the conclusion that a repeat c-section was the best route for me.  Another BPP and NST were scheduled for me at the hospital for Tuesday 12/29.

I prayed, friends prayed about this situation. That God would keep us safe and that he would not let us be shamed for wanting to believe even when it meant going against a doctor’s medical expertise (which I don’t intend to communicate is what should be done all the time).

I cried out to God, I received encouragement from his Word. I read Hebrews Chapter 11 (from the Bible). It was so encouraging to remember that walking by faith might seem and feel crazy at times, but when it is something that God has clearly shown that he will back up…it’s amazing!

13 May the God of hope fill you with all joy and peace as you trust in him, so that you may overflow with hope by the power of the Holy Spirit.

My husband had a change of heart by Monday morning (praise God!)

My husband’s support was just so very important for me. Now even though I was scared, I felt I was not alone, I felt like even though this seemed so crazy…it was right.

I had two sessions with Dr. Travis (acupuncture) recommended by Paula D’ Amore. He checked with me Monday and said if I wanted to go in for another session. So I went in to see Dr. Travis on Tuesday then I headed to West Boca for my 2nd BPP and NST.

The NST recorded that I was having contractions. I was experiencing some light contractions earlier in the afternoon. After BPP and NST tests were done, another Dr. from my OB/GYN’s practice was called in to talk to me. She said that my baby was 10lbs + and that the recommendation was still a c-section. She was going to start talking to me about the things my doctor had already talked to me about so I said: “Doctor, with all the respect…I have already heard this. Could you please tell me were to sign so I can go home?” I signed the paper and left. I had called my hubby to pick me up since I didn’t feel too great.

My husband came with a friend to pick me up. Throughout our trip back home, I was having contractions. They lasted like 40 seconds each and were about 5 minutes apart. We arrived home and I tried to sleep. I rested a bit…like an hour here and there but would wake up because I was experiencing discomfort from the contractions.

I started trying out several of the ideas that many shared with me…bouncing on the exercise ball, swaying from side to side, simply walking back and forth in my living room, jumping in the shower several times to let the warm water run down my back (this was my most favorite strategy).

I also ate and drank fluids throughout these hours. At around 4am I woke up my husband and said we should probably start getting ready. I had some breakfast in the shower…as the water was helping so much to make the contractions more bearable.

My husband took a shower then we left around 6/6:20am. When we left I clearly noticed that the intensity of each contraction was becoming stronger. We decided we were going to Broward Health Coral Springs since it was close, in-network and we knew that at West Boca they were not going to support a natural birth for me (as per doctor recommendations). Broward Health is only a 10 minute drive.

During the drive I had 2 to 3 contractions…they were intense, very intense…I was squeezing the car’s seat for dear life!

My husband pulled up to the ER, we said I was in labor (although it was obvious). As the lady (receptionist) was putting in my info I stood there and said: “I need to push! Please help me!”

She called for a wheelchair. Someone did come fast (although it seemed like an eternity). All I wanted was to push. The ride in the wheelchair seemed like torture. I just wanted to stand up!

We arrived were a group of nurses were and I kept saying “I need to push! Please help me!”

They wheeled me into a room, quickly put on their gloves and I just wanted to push for dear life. The nurse checked me. She said: “She’s at 10!” The nurses were in such a hurry it seemed surreal. They called the doctor. I just wanted to push…the nurse broke my water. She said there is meconium. I got a little scared but not so much because all I could think was “let’s get the baby out…NOW!”

I did feel some relief when she broke my waters.

The wait for the doctor seemed eternal, although she was probably there in less than 20 minutes. They had me lying in a bed, halfway sitting. I kept asking if I could sit up, or squat as my back was killing me with each contraction. They said  they were sorry, they understood that is the “natural” way a woman would want to position themselves to give birth that they could not let me, they said they didn’t have a birthing stool, they said let’s just wait for the doctor. All I could think of other than pushing was…I want to be off my back! 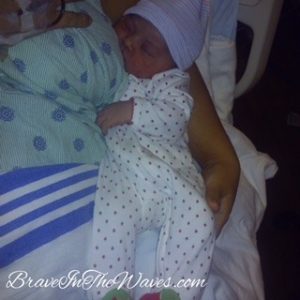 Finally the doctor came in; the baby was out by the second big push! It was amazing! When they placed her over my chest…it was an experience that is out of this world…to feel her little warm body against mine…I loved it. It was as if I had been “injected” with a natural pain medication…the joy was overflowing. My husband and I could only say “Thank you Jesus! Thank you Jesus!”

This was such a miraculous and powerful experience. God certainly restored my heart from my previous birthing experience. For me, it is clear that God has given me back what was taken away from me…the experience to birth our child naturally. It is not that I oppose modern medicine or surgeries when medically deemed necessary, but there’s something precious in waiting for God’s and nature’s timing.

I would like to close this testimony giving thanks to God my heavenly Father, for His Word, for my husband, for friends who I know personally who have gone through a VBAC who kept encouraging me, for friends that I have drawn closer to in a matter of weeks through the ICAN South Florida Community Support Group.

All I can say is THANK YOU!

Finally, a children’s story book comes to mind when I think about this testimony…

“The Little Engine That Could,” by Watty Piper.

“I have never been over the mountain,”…

…”Hurray, hurray,” cried the funny little clown and all the dolls and toys.

Philippians 4:13 NKJV
I can do all things through Christ who strengthens me. 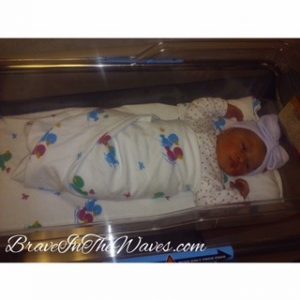 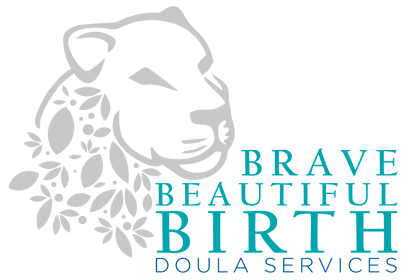 Birth can be many things, why not believe it can be beautiful?